Frocks and Frills: Children’s Fashion at the Turn of the 20th Century 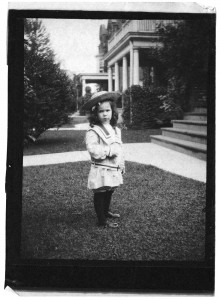 Marriott C. Morris took this photograph of his son, Marriott Jr., in 1903 outside their house on Cresheim Road in the Mt. Airy neighborhood.  Young Marriott’s attire was typical for a boy of three at the time: skirted sailor suit, long hair, stockings and a wide brimmed hat.  However for modern viewers who are used to seeing young boys wearing pants and short hair, this image raises some questions.

In her article “Clothing and Gender in America: Children’s Fashions 1890-1920,” Jo B. Paoletti points out that until about WWI it was common to see boys dressed like Marriott Jr., or in other words, in a way that modern viewers might associate with typical girls fashion.  Paoletti proposes a few motivations for the use of this style.  One reason was quite practical; dresses were easier and cheaper to sew and could be used as a hand-me-down whether the child was a boy or a girl.  However, the Morris family was wealthy enough that the financial benefits of dresses were probably not their chief concern.  According to Paoletti, distinguishing between girls and boys was less important than distinguishing between adults and children.  This effect was heightened by the common use of white fabric in clothing for both boys and girls rather than the gendered pink and blue color coding seen today.  In this context, Marriott Jr.’s light skirted suit and long hair mark him most importantly as a child, rather than as a boy or a girl.

The changes in a child’s dress represented a slow adoption of more adult styles and the child’s gradual maturation.  In the late 19th and very early 20th centuries, all infants wore long white dresses until they were able to walk and shorter dresses until they were about two or three.  After that, both boys and girls often wore skirted suits like the one in Morris’ photo of his son with subtle changes in trim and fastening differentiating between boys and girls.  This image on the right from the July-December, 1889 issue of Godey’s Ladies Book shows examples of clothing for children.  The two designs in the center of the page (Figures 14-17) were intended for children of about two years, the outfit on the left for “every-day wear” and the outfit on the right featuring an insertion of Yak lace.  The text does not specify a gender for the frocks, presumably since both boys and girls would have been wearing them. 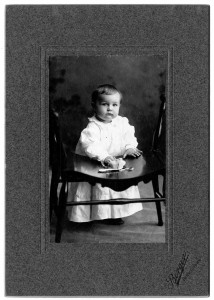 Sometime between ages five and seven, usually coinciding with school attendance, boys graduated to knickerbockers and had their hair cut.  Sailor suits and garments inspired by military uniforms were especially popular.  The design on the lower right of the Godey’s page (Figures 20-21) shows a suit for a boy of about four years reminiscent of a military jacket.  The suit features a vest and trousers, items specifically worn by boys.  It wasn’t until a boy was about twelve that he began to wear long trousers and dress more like a grown man. 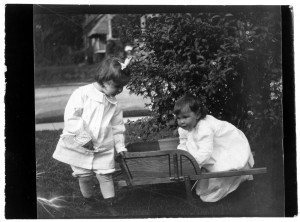 The photographs of Morris’ sons in the Morris Collection provide a visual example of the progression from dresses to trousers typical for young boys around the turn of the century.  In this portrait of Elliston Jr., Morris’ oldest son wears the long white dress common for a child of about one.  Elliston Jr. is able to stand supporting himself on a wooden chair, however since his dress is still long we can presume that he has not yet learned how to walk.  Morris’ second son, Marriott Jr. was born a year later in 1900.  In this photo on the right from 1902, Marriott Jr. is about a year and a half old and Elliston Jr. is three.  Marriott Jr. wears a long dress similar to the one his brother wore in the above photograph while Elliston Jr. has graduated to a 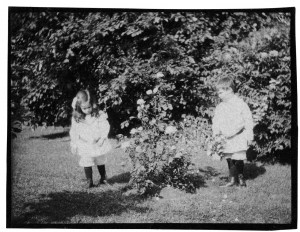 skirted suit.  His hair has been trimmed but is still tied back with a bow.  By 1904, both boys wear skirted suits in the sailor style as seen in the photograph below.  At five years old, Elliston Jr.’s hair is cut short, however at four years old Marriott Jr.’s hair is still long and pulled back with a ribbon.  By 1907, in the family photograph on the right, both boys were dressed in sailor suits with knickerbockers and their hair cut short.  Their younger sister Janet, born that same year, was now wearing a long white dress that was perhaps handed down from one of her brothers.

In general, the Morris children seem to adhere to traditional children’s attire of the time.  However, it seems as though Elliston Jr’s hair was cut short at around three years old while Marriott Jr.’s hair was long until he was about five years old.   As Paoletti points out, the exact timing of a boy’s switch from skirts to trousers and his haircut was ultimately up to his mother.  Perhaps Marriott Jr.’s longer hair reflected a desire on the part of his mother Jane to maintain his childhood innocence just a little bit longer. 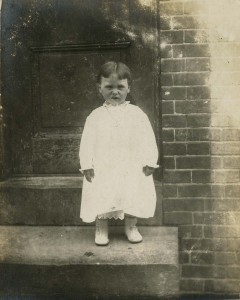 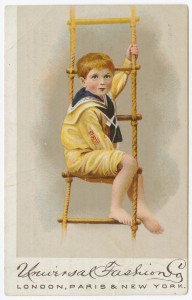 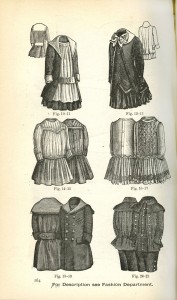 Frocks and Frills: Children’s Fashion at the Turn of the 20th Century
Scroll to top