On November 18, 2017, the Library Company of Philadelphia hosted Snapshot of American Experience a one-day workshop for teachers interested in exploring how to incorporate historical visual primary source material into classroom instruction. Using the Marriott C. Morris Photograph Collection attendees learned a basic timeline for the history of photography and how Morris’s work fit into that context. They also learned tools of visual literacy, or how to “read” a photograph, a valuable skill in today’s media-saturated environment. Attendees worked with both original materials as well as navigating through a publicly-accessible website devoted to the Morris collection. Participants engaged with the collection through selecting and writing about images, and their work is featured below. 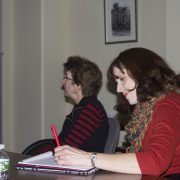 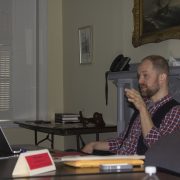 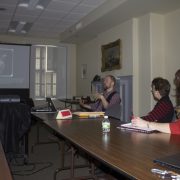 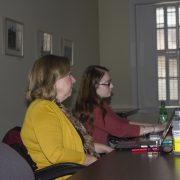 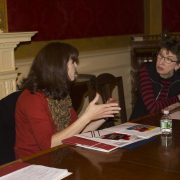 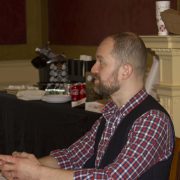 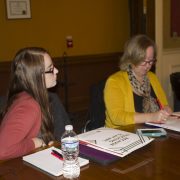 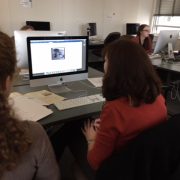 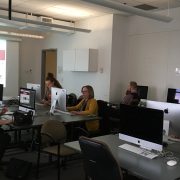 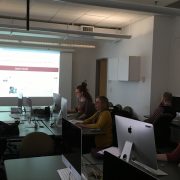 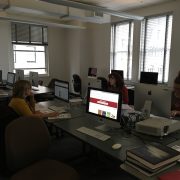 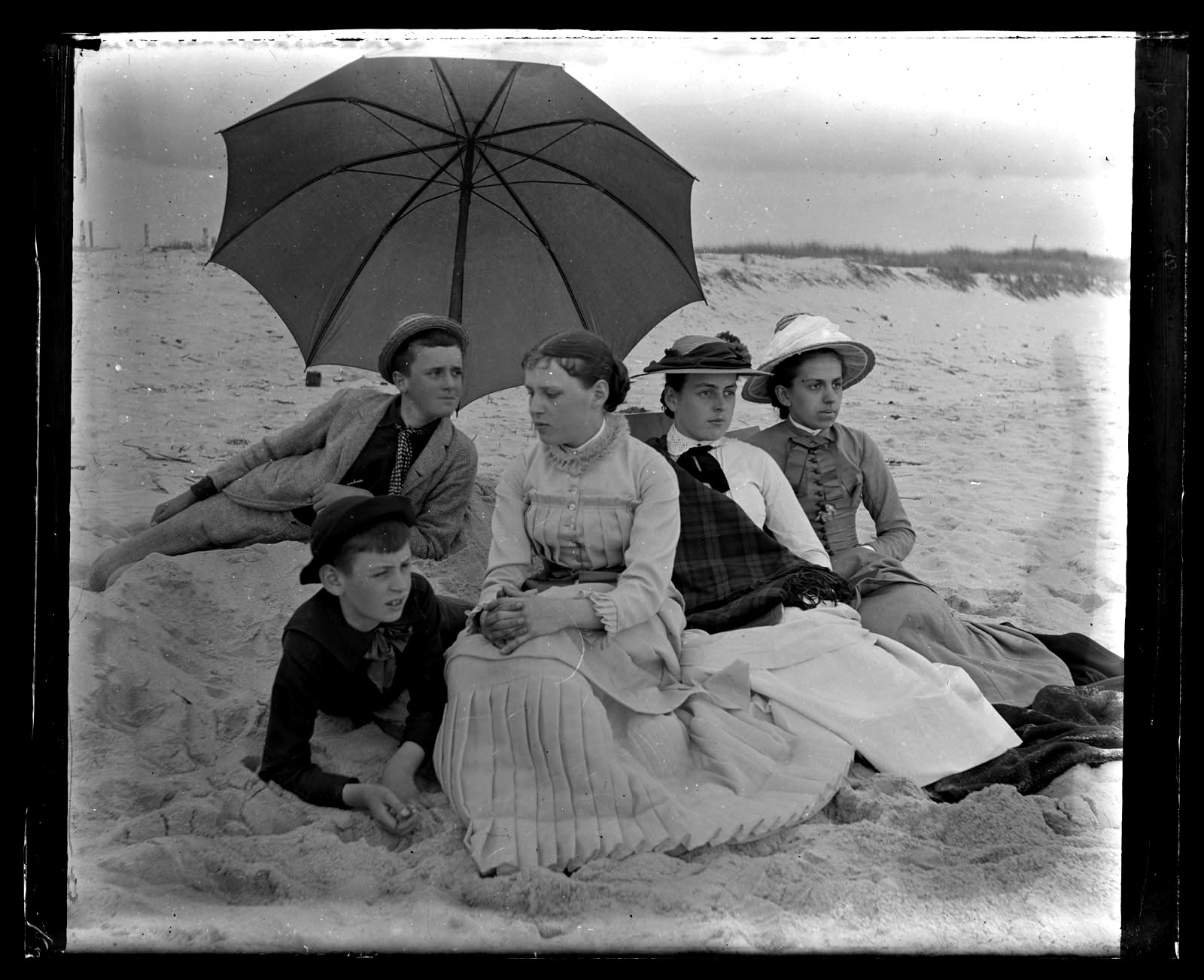 I would use this photograph as a springboard by which to introduce my 4th Graders to the idea of fashion and recreation in the 1880’s and to share their observations in the format of a class discussion as we prepare to begin a unit on painter Georges Seurat and his painting entitled Sunday Afternoon on La Grande Jatte.

I would have the students make comparisons between Morris’ photo and Seurat’s painting, noting similarities and differences between the two works of art. 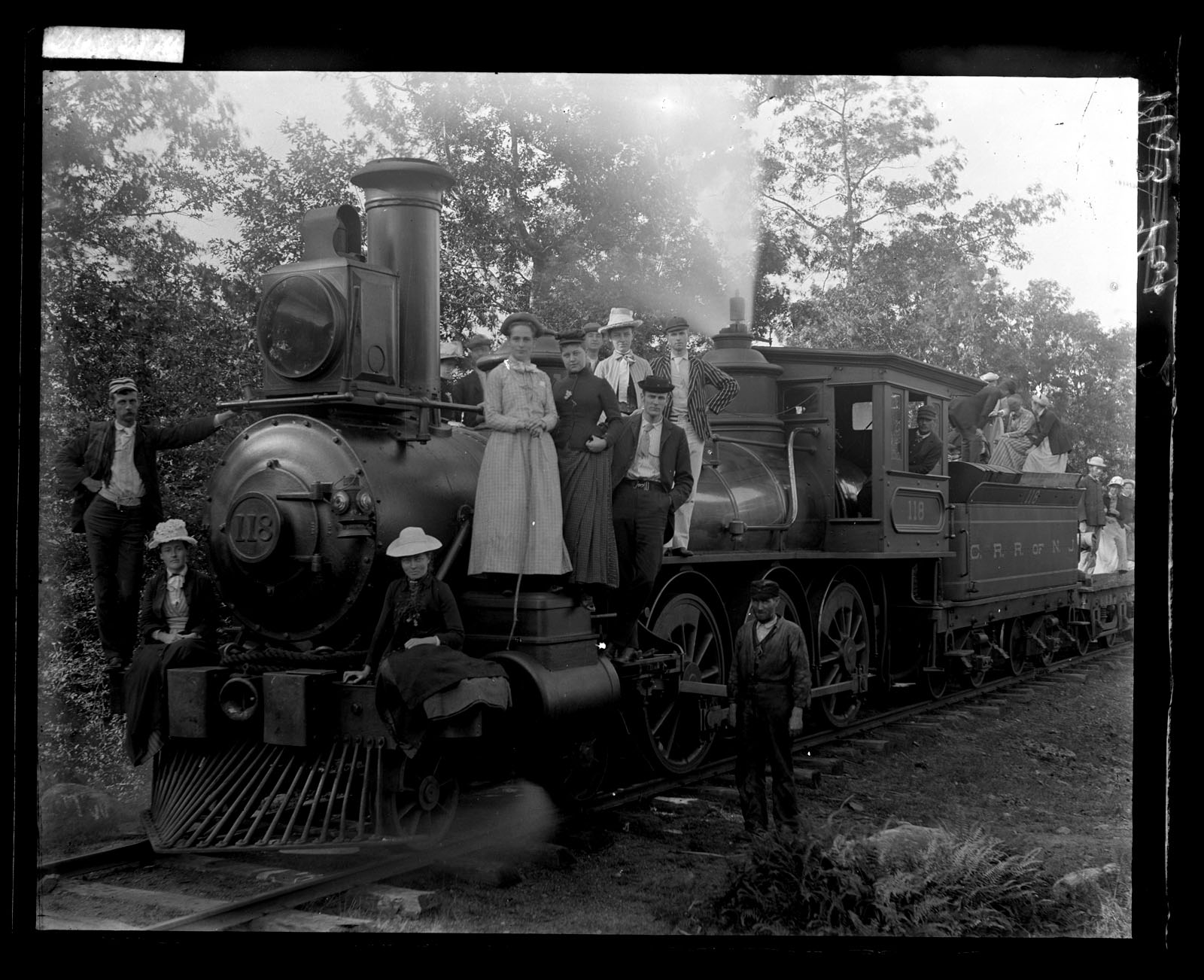 I would use this image to introduce 7th Grade students to a lesson on one-point perspective where they can map out the orthogonals and determine the vanishing point.  I would also invite the students to look at the details of the train as they begin to draw their own trains using the principles of Linear Perspective.  I would then have students study the light & shadow in Morris’ image (with particular emphasis on the various gray tones of the train), and students could then use their observations to depict various gray tones in their own work to add dimension and depth to their imagery. 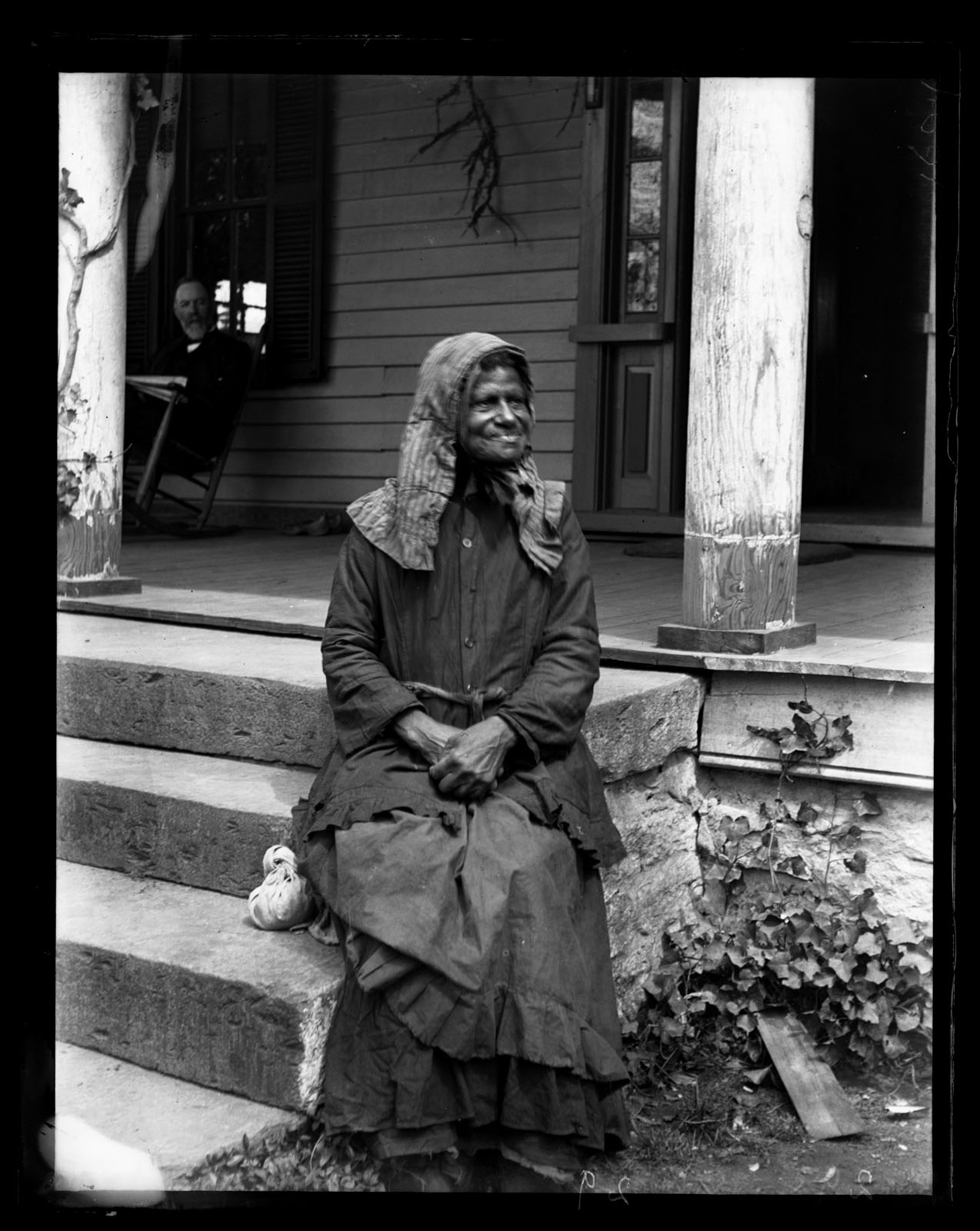 Creator: Morris, Marriott Canby, 1863-1948, photographer.
Title: Aunt Phebe, Mcaboy’s, N.C. [graphic].
Date: March 27, 1890
Physical Description: 1 photograph: glass negative; 4 x 5 in.
Description: Glass negative showing Phebe Mills, an elderly African American woman sitting on the of porch steps of the McAboy House. She wears a long shirt and skirt and sits with her hands folded in her lap. A man sits in a rocking chair on the porch looking down at her. Phebe Mills, born circa 1806, was married to Pauldo Mills, a farmer on the Columbus Mills Plantation. Originally owned by John Mills, this plantation was bought by Dr. Leland Reid McAboy in 1872 and became an inn known as the McAboy House.

When my class studies poetry later in the year, we will be looking at some of the works written by poet Langston Hughes. I choose an image from the Morris collection depicting Aunt Phoebe as the image respectfully represents an African American person in her day to day life. I would like students to analyze Aunt Phebe’s photo regarding the poem “I, too” which is a poem that explores the unjust prejudice that African Americans faced and how the “darker brother” is still an American. The poem also explores how perceptions of other individuals (specifically groups of individuals) change over the course of time.

Morris’ collection represents all of the luxuries that a wealthy, affluent person born in 1863 was afforded (Morris and his family,) which is a stark contrast to the appearance of some of the subjects that he photographed. Aunt Phoebe looks as though she has had a hard life- her face looks weathered and her clothing are loose fitting, but she has a smile on her face. The image echo’s the line in the poem that states “Besides, they’ll see how beautiful I am and be ashamed –I, too, am America.” The line from the poem conveys that the African American citizen is just as beautiful and valid as white citizens, and that eventually white citizens would see and respect that. 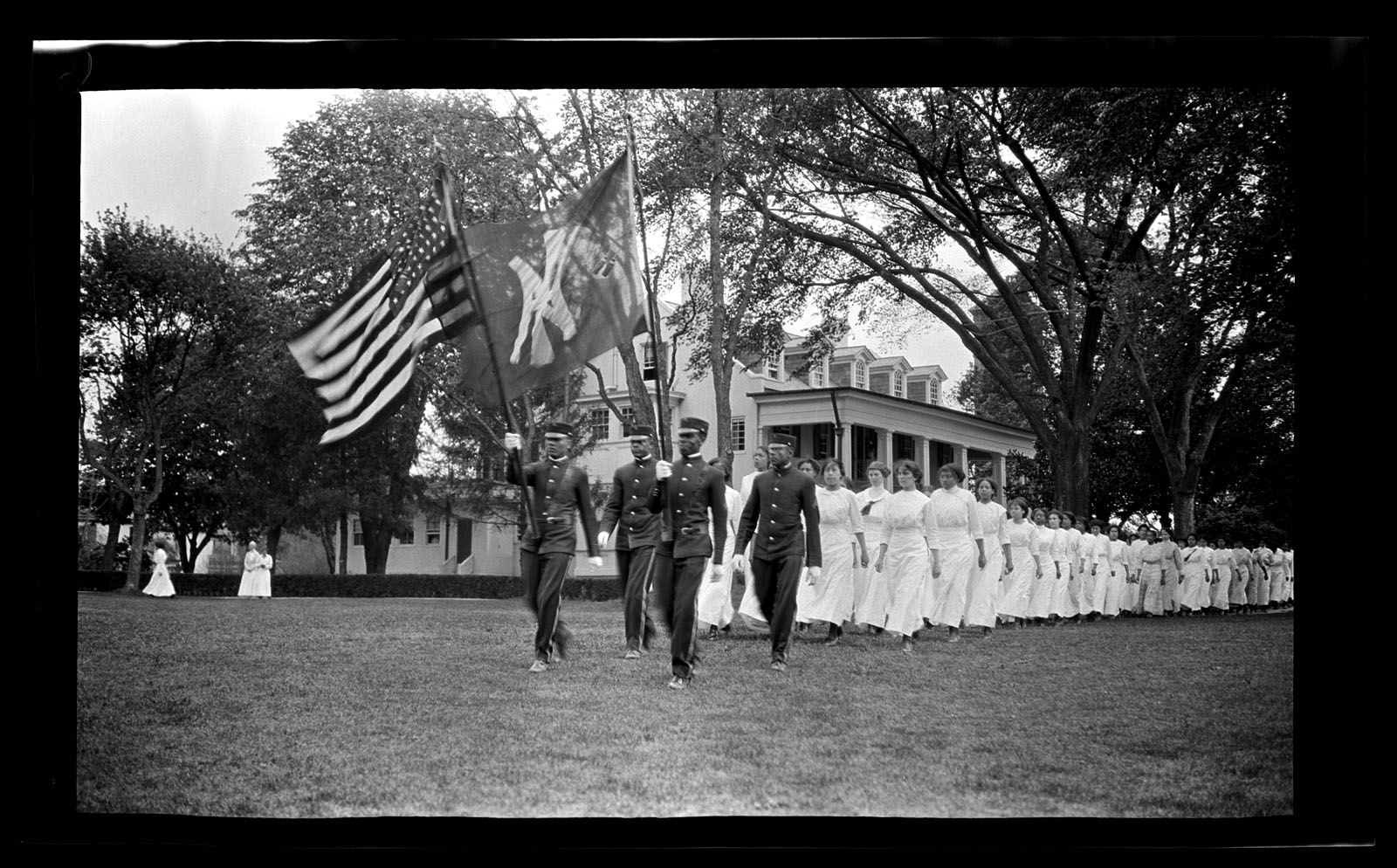 Creator: Morris, Marriott Canby, 1863-1948, photographer.
Title: Girls passing Mansion House, [Hampton Institute, Va.] [graphic].
Date: April 24, 1912
Physical Description: 1 photograph: film negative; 5.75 x 3.5 in.
Description: Film negative showing a group of African American women in white dresses marching in lines across a lawn at the black university, Hampton Institute. Four African American men in uniform march in front of the women, two of them carrying flags. The Hampton Institute, originally the Hampton Agricultural and Industrial School, was founded in 1868 by the American Missionary Association to provide education for freed black citizens after the Civil War. It was built on the grounds of a former plantation, known as Little Scotland. The school was legally chartered in 1870 and accredited as a university in 1984. Notable graduates include Booker T. Washington. The Mansion House was the original residence of the plantation.

I selected this image of female students at an HBCU, Hampton Institute, circa 1912.  We do not know who the induvial students are, but we can learn a lot about them from the image that Morris captured.   The school was built on the grounds of a former slave plantation in Virginia, founded in 1868 as the Hampton Agricultural and Industrial School for freed black citizens after the Civil War.  I would use this image in working with undergraduate History students, to have them look at history of education for African American students in the United States.  Starting with observation, what do you see?  Describe the uniforms of the men, and the uniforms of the women.  Look at the flags they are carrying – what do they tell us about the institution?  Let’s see what we can find out about the physical setting of the image.  What is the building in the background? (The Mansion House).  What can we learn about the history of the institution?  Having the students reflect on the image, I would have them do additional research on Hampton University today.   What can we learn about the African American educational experience from this image, and of the education of women of color in particular?  What can this photograph from 1912 tell us about the education of women of color in the early 1900’s that we may not be able to learn anywhere else?  Why do you think the photographer, Marriott C. Morris, was at the Hampton Institute in 1912?